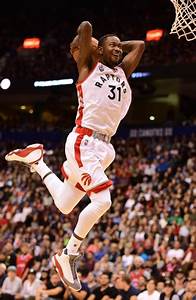 On November 2, 2015, Ross signed a three-year, $33 million contract extension with the Raptors. Ross averaged just 6. 3 points in 17. 5 minutes over the first seven games of the season, coming off the bench in all seven. He then missed six games with a left thumb injury before returning to action on November 20, scoring eight points in a 102–91 win over the Los Angeles Lakers. He made his first start of the season on December 7, also against the Lakers, scoring a season-high 22 points in place of injured starter DeMarre Carroll. On February 28, 2016, he set a new season high with 27 points in a 114–101 loss to the Detroit Pistons. On March 30, he scored 13 points in a 105–97 win over the Atlanta Hawks, helping the Raptors record a 50-win season for the first time in franchise history. In the Raptors' regular season finale on April 13, Ross recorded his first double-double of the season with 24 points and 10 rebounds off the bench in a 103–96 win over the Brooklyn Nets.