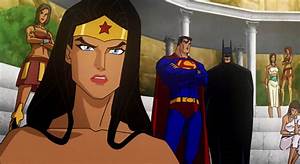 In the first story arc, "The World's Finest", also referred to as "Public Enemies" (issues #1–6, illustrated by Ed McGuinness), then-U. S. President Lex Luthor declares Superman and Batman enemies of the state, claiming that a Kryptonite asteroid headed for Earth is connected to an evil plot by Superman. Luthor offers a $1,000,000,000 bounty, which encourages both supervillains and superheroes to attack. Superman almost kills Lex, with Batman standing aside. Superman changes his mind at the last moment. The new Toyman, Hiro Okamura, assists with the asteroid's destruction. Captain Atom is seemingly killed. The danger averted and Luthor's plans in jeopardy, Luthor injects himself with a mixture of Venom and synthetic Kryptonite, dons a battle suit from the planet Apokolips, and confronts Batman and Superman. Luthor is defeated and appears to die in the battle, although he is shown to survive. In the course of the fight, Luthor is irrevocably exposed to the world as a villain for the first time in Post-Crisis continuity. Losing the presidency, Luthor is succeeded in office by Pete Ross.