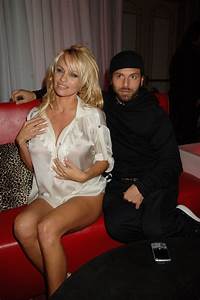 One of Anderson's campaigns as a member of PETA has been against the use of fur. In 1999, Anderson received the first Linda McCartney Memorial Award for animal rights protectors, in recognition of her campaign. In 2003, Anderson stripped down for PETA's "I'd Rather Go Naked Than Wear Fur" advertising campaign. On June 28, 2006, Anderson posed naked with other protesters on a window display of the Stella McCartney boutique in London, England. It was a PETA gala event before the PETA Humanitarian Awards. Anderson went inside the boutique and said she would take her clothes off if the event raised enough money for PETA, which it did. She campaigned against Kentucky Fried Chicken. In 2001, Anderson released a letter in support of PETA's campaign against Kentucky Fried Chicken, stating "What KFC does to 750 million chickens each year is not civilized or acceptable. " She later made a video about KFC's treatment of chickens. In January 2006, Anderson requested that the Governor of Kentucky remove a bust of Colonel Sanders, the founder of KFC, from display but her request was refused even when she offered her own bust in exchange. In February 2006, Anderson decided to boycott the Kentucky Derby because of its support for Kentucky Fried Chicken.