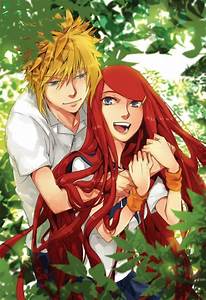 Naruto Uzumaki (うずまき ナルト, Uzumaki Naruto) is the titular protagonist of the series. He was the first character created by Kishimoto during the conception of the series and was designed with many traits from other shōnen characters. He is often ridiculed by the Konohagakure villagers, as he is the host of Kurama, the Nine-Tailed Fox that attacked Konoha. [ch.  2] He compensates for this with his cheerful and boisterous personality, vowing to never give up on any goal he sets. In particular, Naruto has ambitions of becoming Hokage, the leader of Konohagakure, to gain the villagers' respect and be able to protect both them and the world. Over the course of the series, Naruto befriends many foreign and Konoha people and eventually gains a sizable positive impact on their lives to the point where he gains worldwide fame. [ch.  450] Naruto eventually achieves his dream of becoming Hokage, marries Hinata Hyuga and has two children named Boruto Uzumaki and Himawari Uzumaki. [ch.  700]