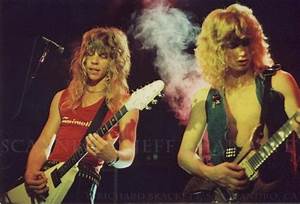 Hetfield was born on August 3, 1963 in Downey, California, the son of Cynthia Bassett (née Nourse), a light opera singer, and Virgil Lee Hetfield, a truck driver. He is of English, German, Irish, and Scottish descent. [citation needed] He has two older half-brothers from his mother's first marriage and one younger sister. His parents divorced in 1976 when Hetfield was 13. They were very strict Christian Scientists, and in accordance with their beliefs, they strongly disapproved of medicine or any other medical treatment and remained loyal to their faith, even as Cynthia was dying from cancer. This upbringing became the inspiration for many of Hetfield's lyrics during his career with Metallica, most notably in the songs "Dyers Eve" and "The God That Failed" from . . . And Justice for All and The Black Album respectively. Cynthia died of cancer in 1979 when Hetfield was 16 years old. After the death of his mother, Hetfield went to live with his older half-brother David. Virgil died in late 1996, during Metallica's Load tour. Hetfield attended Downey High School for his freshman and sophomore years and graduated from Brea Olinda High School in 1981.