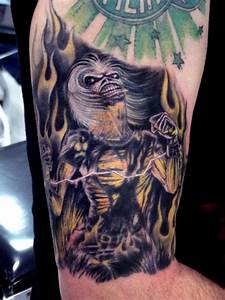 Iron Maiden recruited yet another guitarist in 1977, Bob Sawyer, who was sacked for embarrassing the band on stage by pretending to play guitar with his teeth. Tension ensued again, causing a rift between Murray and Wilcock, who convinced Harris to fire Murray, as well as original drummer Ron Matthews. A new line-up was put together, including future Cutting Crew member Tony Moore on keyboards, Terry Wapram on guitar, and drummer Barry Purkis (better known today as Thunderstick). A poor performance at the Bridgehouse, a pub located in Canning Town, in November 1977 was the line-up's first and only concert. Afterwards, Iron Maiden fired Purkis and replaced him with Doug Sampson. At the same time, Moore was asked to leave as Harris decided that keyboards did not suit the band's sound. A few months later, Dennis Wilcock decided to leave Iron Maiden to form his own band, V1, and Dave Murray was immediately reinstated. As he preferred to be the band's sole guitarist, Wapram disapproved of Murray's return, and was also dismissed.