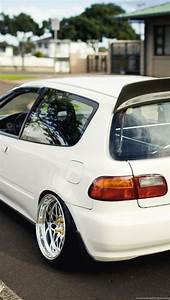 The first generation Honda Civic was introduced on 11 July 1972, but sold as a 1973 model in Japan. It was equipped with a 1,169 cc (71. 3 cu in) four-cylinder water-cooled engine and featured front power disc brakes, reclining vinyl bucket seats, simulated wood trim on the dashboard, as well as optional air conditioning and an AM/FM radio. The Civic was available as a two- or four-door fastback sedan, three- and a five-door hatchback, as well as a five-door station wagon. Due to the 1973 oil crisis, consumer demand for fuel efficient vehicles was high, and due to the engine being able to run on either leaded or unleaded fuel, it gave drivers fuel choice flexibility over other vehicles. The CVCC engine debuted in December 1973, with a head design that allowed for more efficient combustion, and as a benefit the CVCC system did not require a catalytic converter or unleaded fuel to meet 1975 Environmental Protection Agency emissions standards for hydrocarbons and carbon monoxide. The Civic was joined by a platform expansion of the three-door hatchback, called the Honda Accord in 1976.