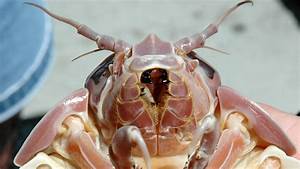 Their morphology resembles that of their terrestrial relative, the woodlouse; their bodies are dorsoventrally compressed, protected by a rigid, calcareous exoskeleton composed of overlapping segments. Like some woodlice, they also possess the ability to curl up into a "basketball", where only the tough shell is exposed. This provides protection from predators trying to strike at the more vulnerable underside. The first shell segment is fused to the head; the most posterior segments are often fused, as well, forming a "caudal shield" over the shortened abdomen (pleon). The large eyes are compound with nearly 4,000 facets, sessile, and spaced far apart on the head. They have two pairs of antennae. The uniramous thoracic legs or pereiopods are arranged in seven pairs, the first of which is modified into maxillipeds to manipulate and bring food to the four sets of jaws. The abdomen has five segments called pleonites, each with a pair of biramous pleopods; these are modified into swimming legs and rami, flat respiratory structures acting as gills. The isopods are a pale lilac or pinkish in colour.