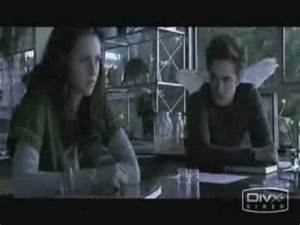 Stephenie Meyer stated that the original concept of Edward originated in a dream that she had, in which an "average girl" and a "fantastically beautiful, sparkly . . . vampire . . . were having an intense conversation in a meadow in the woods. " In this dream, the pair "were discussing the difficulties inherent in the facts that . . . they were falling in love with each other while . . . the vampire was particularly attracted to the scent of her blood, and was having a difficult time restraining himself from killing her. " She chose the name "Edward" because she thought it was "a name that had once been considered romantic, but had fallen out of popularity for decades". Meyer says that Edward is a combination of her three favorite leading men - Jane Eyre's Edward Rochester, Fitzwilliam Darcy from Pride and Prejudice, and Gilbert Blythe from Anne of Green Gables—particularly Edward Rochester, who, like Edward Cullen, sees himself as a "monster". A recurring theme in the series, especially in the first three books, is that Edward is constantly trying to avoid accidentally harming Bella, due to his vampire nature.