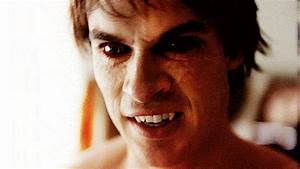 In the first season, Damon appears as the frightening older brother to Stefan Salvatore, and plays as the main antagonist for the first initial episodes with an hidden agenda. Slowly, Damon begins to be kinder to the other characters, showing brief moments of compassion such as erasing Jeremy's memory of vampires and removing his "suffering" so Jeremy gets his life back on track. Damon apologizes for turning Vicki Donovan into a vampire and admits it was wrong. Later at the Gilbert house, Elena returns home. Damon admits that he came to the town wanting to destroy it but actually found himself wanting to protect it after everything that happened at the Founder's Day celebrations and says he's not a hero and doesn't do good, saying it's not in him - those traits are reserved for Stefan, Elena and Bonnie. The two begin to kiss passionately before getting interrupted - it is later revealed that it wasn't Elena he kissed, but Katherine Pierce. Later in the season, it also implies that he actually feels human emotions, such as pain and love, which helps the viewer sympathize toward his character in some situations. But mostly, he likes to take care of himself and do the dirty work, in his own sadistic ways.