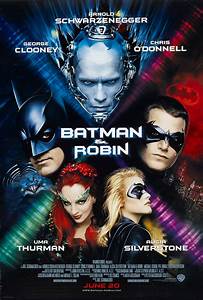 Batman Returns was released in 1992 with financial success and generally favorable reviews from critics, but Warner Bros. was disappointed with its box office run, having made $150 million less than the first film. For Batman Forever, Tim Burton, the director of the first two Batman films, was already working on the third Batman film which was going to be titled Batman Continues which was going to star Michael Keaton, Michelle Pfeiffer, Billy Dee Williams, Robin Williams, Rene Russo and Marlon Wayans but following the release of the previous film, McDonald's said that Batman Returns was inappropriate for children, so Warner Bros asked Burton to step down as director in favor of Joel Schumacher. Husband-and-wife screenwriting couple Lee and Janet Scott-Batchler were brought on to write the script, and agreed with Burton that "the key element to Batman is his duality. And it's not just that Batman is Bruce Wayne". Their original script introduced a psychotic Riddler with a pet rat accompanying him. The story elements and much of the dialogue still remained in the finished film, though Schumacher felt it could be "lighte[ne]d down". Keaton initially approved the selection of Schumacher as director and planned on reprising his role as Batman from the first two films. Schumacher claims he originally had in mind an adaptation of Frank Miller's Batman: Year One and Keaton claimed that he was enthusiastic about the idea. Warner Bros. rejected the idea as they wanted a sequel, not a prequel, though Schumacher was able to include very brief events in Bruce Wayne's childhood with some events of the comic The Dark Knight Returns. Akiva Goldsman, who worked with Schumacher on The Client, was brought in to rewrite the script. Burton, who was more interested in directing Ed Wood, later reflected he was taken aback by some of the focus group meetings for Batman Forever, a title which he hated. Producer Peter MacGregor-Scott represented the studio's aim in making a film for the MTV Generation with full merchandising appeal.