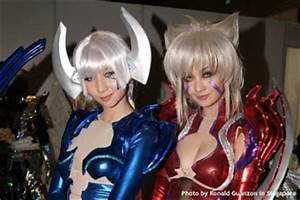 Gosiengfiao became involved in cosplay after contacting other anime and video game enthusiasts in an internet fan forum called Animé Club. Encouraged by her friends from the forum, she started cosplaying in 2003 at the age of 15, joining various competitions in Metro Manila. Her first cosplayed character was a Priestess from Ragnarok Online at Ragnalaunch in Glorietta. She began to attract attention when she won 3rd place in the 2003 C3 Convention as Gun Mage Rikku of Final Fantasy X-2. This led to her and her younger sister Ashley Gosiengfiao being featured on the cover of Issue 14 of Culture Crash Magazine, a manga magazine in the Philippines. Since then, she cosplayed a series of characters from over 40 anime, movie and video game titles including: Witchblade, G. I. Joe, K-On!, Paradise Kiss, Evangelion, and Final Fantasy X-2. As a multi-awarded cosplayer, she is now being invited to appear at conventions or to judge competitions locally and abroad. She started judging at the age of 18.