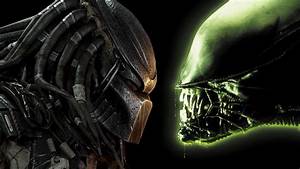 The first Alien vs. Predator story was published by Dark Horse Comics in Dark Horse Presents #34–36 (November 1989 – February 1990). In November 1990, Predator 2 was released in theaters and included a scene depicting an Alien (Xenomorph) skull as one of the Predator's trophies. Over the coming years, Fox had been pursuing a cinematic adaptation of the concept to advance the Alien and Predator franchises further, and Peter Briggs was tasked with the job to write an early script for the project and eventually pitched an idea titled The Hunt: Alien vs. Predator in 1994, but the pitch was rejected and development of the film remained stuck in development hell for almost a decade before the first feature film was finally released in 2004 under the helm of Paul W. S. Anderson, titled Alien vs. Predator, with a sequel by the Brothers Strause, titled Aliens vs. Predator: Requiem, eventually released in 2007. Ellen Ripley does not appear in this franchise, as it takes place more than a century prior to the events of the Alien series.